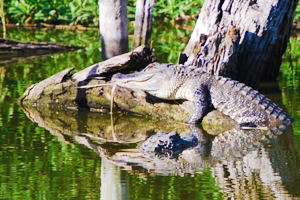 "Beast of the Bayou," "King of the Marsh" or even "Lion of the Marsh" because if its load roar. These are just some of the names for the American alligator, the largest reptile in North America. The name alligator comes from Spanish explorers who called them "El legarto" or "big lizard." Louisiana has the highest alligator population in the U.S., approaching 2 million individuals with thousands more on alligator farms. In fact, alligators outnumber people 10 to 1 in Cameron Parish! Alligators, like all reptiles are cold blooded, meaning that their body temperature is regulated by the temperature of the environment around them. This is why alligators bask in the sun, trying to keep warm on cool days. In fact, their body rates slow down during the cool winter months to the point where they can no longer catch food efficiently. When this happens they enter underground holes and remain dormant through the winter. Female alligators can grow to 9 feet and weigh more than 200 pounds. Males can grow to 14 feet and weight more than 500 pounds. The largest alligator on record was taken on Marsh Island, Louisiana and was 19 feet 2 inches long! Estimating size in-depth menu option: Often you can only see an alligator's snout and eyes above the water. To judge the length of a submerged alligator, estimate the distance in inches between the tip of the alligator's snout to its eyes. You can then assume that the alligator is as long in feet. In other words, if it looks like the eyes are 8 inches from the tip of the snout; the alligator is probably about 8 feet long. Alligators that survive into adulthood can live as long as humans averaging about 70 years, and some have been known to live to be 100 years old. Alligators usually shy away from humans - unless the humans are foolish enough to try to feed, touch or swim near the alligator. That said, we do advise keeping your pets in the car or on a short leash! Alligators will eat just about anything, including crawfish, crabs, fish, snakes, frogs, birds, nutria, deer, wild pigs, and even other alligators!