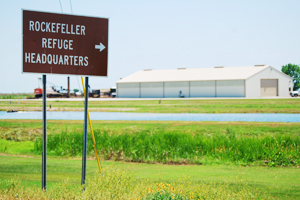 On the surface the Rockefeller Refuge looks similar to the other wildlife refuges along the Creole Nature Trail. However, this site is special in several ways. First, unlike the other wildlife refuges that are managed by the federal U.S. Fish and Wildlife Service, Rockefeller is managed by the Louisiana Department of Wildlife and Fisheries. The Rockefeller Foundation donated the land to the state back in 1919. But the most distinctive feature of this refuge is that it is an outdoor laboratory where world-class research is conducted. Rockefeller is most famous for its alligator research. There is no place in the world that has a higher density of alligators than here at Rockefeller. Scientists at Rockefeller study the life history of alligators - their diet, mating habits, movements, and populations. They learned, for example, that after mating male alligators leave to establish their own territories while the females build a nest of mud and vegetation above flood level. They then lay 20-40 goose-egg-sized eggs which hatch after about 65 days. The mother does not sit on the eggs and incubate them like a bird, instead they only sit on the nest to pack it down or repair it. Instead the heat for incubation comes from the rotting vegetation - like a compost pile. Interestingly the sex of the young is not determined at conception but rather while in the egg. If the temperature is above 93 degrees males develop, if it is below 86 degrees females develop, between these temperatures either sex can develop. After the eggs hatch, the mother alligator will stay with her young for a year or more. One important implication of this research was that male alligators could be harvested in September without affecting the next generation of alligators. Because of this research, the American Alligator was removed from the endangered species list, allowing for managed harvests and securing healthy alligator populations for the future.