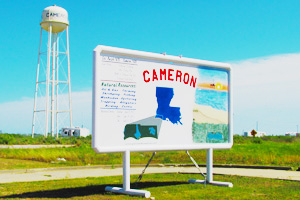 Welcome to Cameron; a community of survivors who live on and with the land. In 1957, Hurricane Audrey hit Cameron with a 12 foot storm surge and 150 mile per hour winds, killing more than 500 residents. In 2005, it was Hurricane Rita. This time the town was evacuated and there was no loss of life in Cameron, but the damage, as you have already seen, was devastating. Then on September 14, 2008, Hurricane Ike totally inundated Cameron with an astounding 22-foot storm surge. Ike caused catastrophic flooding throughout the entire parish with surge and some floodwaters reaching as far north as Lake Charles, 60 miles inland.