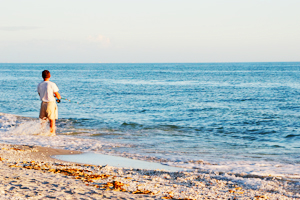 Just ahead you'll see a small sign directing you to Rutherford Beach. Rutherford Beach is a pristine beach without the homes and developments of other nearby beaches. Visit this beach for surf fishing, shelling, strolling along the sand, or just sitting on the sand absorbing this peaceful setting, letting the waves calm and cleanse your soul. Whatever activity you chose, you will likely share the sand with shorebirds running along the wet sand. Famed ornithologist Roger Tory Peterson wrote, "The shorebirds, although muted in plumage, are nevertheless one of the most glamorous groups of birds." And there are few places in the world where this glamour is on display so richly and abundantly. Shorebirds are groupings of birds that include sandpipers, plovers, and other similar species. Here you will see Sanderlings dart along the wet sand... running just out reach of the breaking waves, as if they don't want to get their feet wet and Willets, with their striking black and white wings, probing and picking with their long customized bills as they stroll. This plain gray bird has surprising and striking black and white wings when it flies. The chunky and more sedate Black-bellied Plovers look dapper in their breeding plumage but rather plain in the fall and winter. One of the most spectacular and dramatic scenes along the Louisiana coast are flocks of shorebirds twisting and turning in unison while speeding ahead at 40 mph. For generations, ornithologists have been mystified by shorebirds' ability to make hair pin turns instantly as a group. Over the centuries, this ability has been attributed to the whims of the gods, natural telepathy, and "group soul." Today this phenomenon is being studied by computer scientists, physicists, mathematicians and biologists. While we still do not completely understand how they do it, it appears each individual bird watches several nearby birds in the flock and instantly mimics their movements in what has been called a "Chorus Line effect."