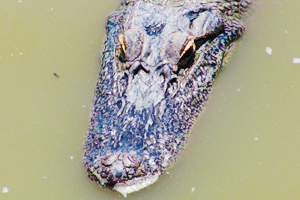 Alligators are a valuable renewable natural resource. They were first harvested in Louisiana in great numbers in the early 1800's. Their skin was used to make boots, shoes and saddles, and their oil was used to grease steam engines and cotton gins. Louisiana alligators were used to make shoes and saddles for the confederate troops during the Civil War. In fact they were so valuable that they were trapped and hunted almost to extinction. Alligators were listed as an endangered species in 1967, but through the research and management recommendations developed at the Rockefeller Refuge, the alligator was removed from the endangered species list in 1987. Louisiana now has a wild alligator season that harvests up to 35,000 alligators during the month of September each year.Louisiana also has an alligator farming program which allows individuals to collect alligator eggs on private lands, hatch the eggs, and then raise these alligators until they reach 3-5 feet in length.  Then the farmer is required to return a percentage of the animals back to the wild. The remaining percentage can be sold by the farmer. In total over $20 million is generated annually from alligators in Louisiana.